With No U.S. Support, Leaders of Afghan Resistance Flee the Country

The son of Afghanistan’s most celebrated anti-Taliban resistance leader has escaped into neighboring Tajikistan, less than a month after vowing to defend his homeland “no matter what happens.”

The retreat of the two key Afghan resistance figures contradicts public claims that they are still in Afghanistan and holding out against the Taliban and signals a remarkable shift in their fortunes: For the first time in decades, the United States government and the CIA do not appear to be backing them. Massoud and Saleh are both seeking military aid and equipment from the West, but the Biden administration is not supporting them and has given no indication of whether it will provide future assistance, according to the two former Afghan officials and a retired U.S. intelligence official.

On Wednesday, Massoud hired Washington lobbyist Robert Stryk. Massoud and Saleh have been embraced by prominent Republicans like Sen. Lindsey Graham, who is keen on the U.S. returning to Afghanistan.

Neither Massoud nor Saleh has been seen in public since the Taliban took Panjshir. Both come from the mountainous northeastern province, a perennial base of Afghan resistance, first against the Soviet Union and later the Taliban. Massoud is currently in a “safe house” in the Tajik capital of Dushanbe, according to a former senior Afghan government official who spoke with him last week, while Saleh is in a nearby location. 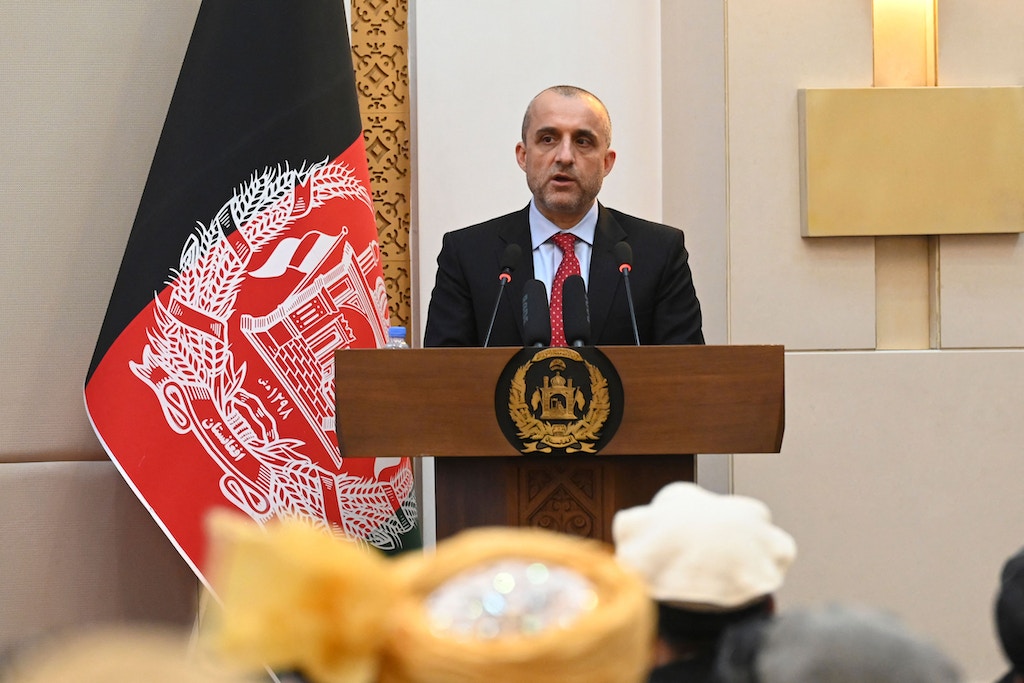 Former Vice President of Afghanistan Amrullah Saleh speaks during a function at the Afghan presidential palace in Kabul on August 4, 2021.

Saleh last tweeted on September 3, as the Taliban began encircling Panjshir. In an accompanying video, he dismissed reports that he had already fled Afghanistan as “totally baseless.” “The RESISTANCE is continuing and will continue,” Saleh tweeted. “I am here with my soil, for my soil & defending its dignity.”

On Monday, Ali Maisam Nazary, a spokesperson for Massoud, told The Intercept that Massoud “is inside Afghanistan … in an undisclosed location.” Saleh could not be reached for comment.

Saleh, who once worked as an aide to Ahmad Shah Massoud and served many years in senior positions in Afghanistan’s U.S.-backed government, tweeted last month that he was the legal successor to former Afghan President Ashraf Ghani, citing Ghani’s decision to flee to the United Arab Emirates. “As per d constitution of Afg, in absence, escape, resignation or death of the President the FVP [First Vice President] becomes the caretaker President,” Saleh tweeted on August 16, the day after the Taliban seized control of Kabul. “I am currently inside my country & am the legitimate care taker President.”

In August, prominent Republicans like Graham and Rep. Mike Waltz called on the Biden administration to recognize Saleh and Massoud as the “legitimate government representatives” of Afghanistan. “We will be going back into Afghanistan,” Graham told the BBC earlier this month. “We’ll have to because the [terror] threat will be so large.”

“I want his voice out,” Graham said of Saleh in an interview with Politico last week. “I’m gonna go all in. [The Taliban are] holding our people hostage. They’re a terrorist group. They’re a radical Islamic jihadist group.” Graham also reportedly secured Saleh a slot on Sean Hannity’s Fox News show in August; Waltz managed to get Massoud booked on Fox News as well. On Tuesday, James Hewitt, a spokesperson for Waltz, reiterated the congressman’s call to recognize Saleh and Massoud as the legitimate representatives of Afghanistan, saying, “Yes, this is still his position,” and linking to a press release titled “Waltz, Graham Call on Biden to Recognize Opposition Forces in the Panjshir Valley.” Graham did not respond to requests for comment.

A growing number of Republican senators have also been urging Biden to designate the Taliban as a terrorist organization, with Senate Intelligence Committee Vice Chair Marco Rubio introducing legislation that would do just that — a move that would likely doom diplomatic engagement with the new government.

The U.S. has long supported opposition groups in Afghanistan, going back to the CIA’s role in arming Afghan mujahideen to fight the Soviets under President Ronald Reagan. Ahmad Shah Massoud, a legendary resistance commander, received CIA funding under Reagan and subsequent U.S. administrations, as his militia ousted the Soviets from Kabul and later led the opposition to the Taliban. Massoud was assassinated by Al Qaeda operatives two days before the 9/11 attacks.

It is not clear whether Ahmad Massoud and his National Resistance Front will win the support of U.S. or other Western governments this time around. Prospects for the resistance appear grim, with the New York Times reporting last week that “combat had largely ceased” in Panjshir province and that “what resistance remained seemed confined to mountainous areas.”

Though Western intelligence agencies have not formally cooperated with Massoud, they reportedly have held informal meetings. There is also ample historical precedent for opposition groups fleeing to neighboring countries to plot their eventual return. This happened most recently in 2001, when the Taliban disappeared into Pakistan and Iran to regroup.