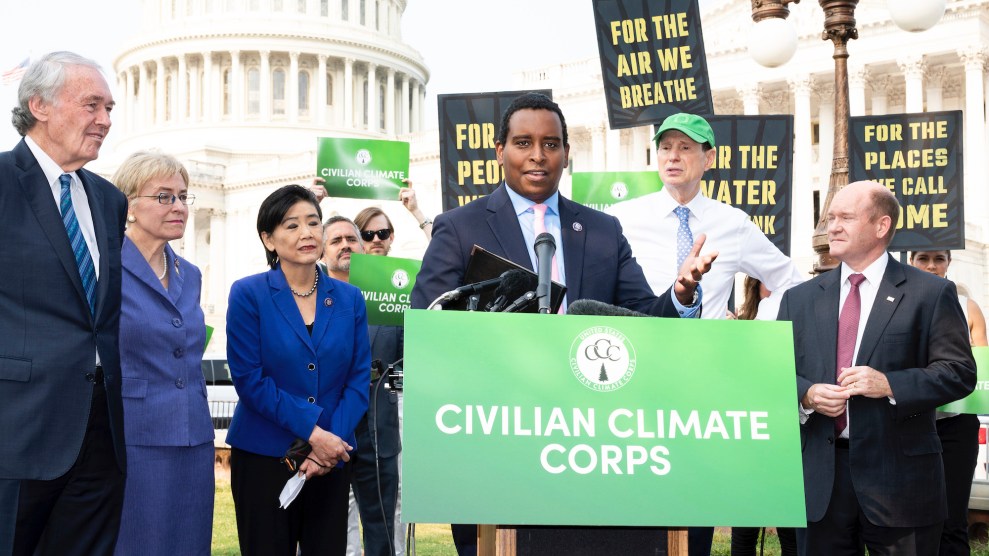 Rep. Joe Neguse (D-Colo.) speaking at a press conference on the creation of a Civilian Climate Corps on July 20, 2021.Michael Brochstein/Sipa via AP Images

Fight disinformation. Get a daily recap of the facts that matter. Sign up for the free Mother Jones newsletter.

The Civilian Climate Corps had been a progressive pipe dream when delegates from President Joe Biden and Sen. Bernie Sanders’ (I-Vt.) 2020 presidential campaigns convened to discuss policy last summer. The program, which would hire young people to work on climate and clean energy projects, represents the core promise of the Green New Deal, a vision favored by Rep. Alexandria Ocasio-Cortez (D-N.Y.) and progressive climate activists but derided by the Democratic mainstream. Biden had eschewed the Green New Deal during his run for the presidency in favor of something more “rational and affordable.”

But Ocasio-Cortez had been among those Sanders chose to represent his campaign on climate matters, and it was through that convening of the former campaign rivals’ allies that the Civilian Climate Corps found its way into the Biden administration’s $6 trillion jobs and infrastructure proposal. The president touted the jobs program as he surveyed wildfire damage across the western United States this week, promising its creation “would make an enormous difference” in the battle against climate change and the devastation extreme weather events have left in their wake.

AmeriCorps’ low-paying jobs have a track record of attracting privileged, often white young adults who parachute into hardscrabble communities, only to abandon them once their service is up.

Now, Democratic lawmakers are debating the size and structure of the Civilian Climate Corps slated for a $3.5 trillion budget bill that, through the particulars of the budgeting process, can pass on a party-line vote. “A year ago, very few would have thought that we could get a bill to the president’s desk,” Rep. Joe Neguse (D-Colo.), a key proponent of the program, tells me.

But that debate has hit a roadblock. Senate Majority Leader Chuck Schumer (D-N.Y.), Democratic climate hawks, and progressive allies are pushing for $30 billion for the program, three times what the White House suggested. House Democratic leadership, meanwhile, wants to allocate only $10 billion for the program. Also up for debate is how the program is structured: Progressive lawmakers and allies would like to see the Civilian Climate Corps as a new initiative housed under the umbrella of AmeriCorps—a federal program that operates akin to Peace Corps’ domestic cousin—while House leadership would like to use the funding to expand existing apprenticeship and job training programs. At the core of the disagreement is a debate over the best way to address the legacy of racism and unequal access to government programs that have plagued such efforts in the past.

The focus on equity stems from the failed promise of the original Civilian Conservation Corps, a New Deal-era program on which the Civilian Climate Corps is based, that put only single, mostly white, young men to work during the Great Depression. And the reason for the debate over how to address it is that no one is quite sure how a Civilian Climate Corps is supposed to work. The White House prescribed $10 billion for the program in the jobs proposal it released in March, promising to “put a new, diverse generation of Americans to work conserving our public lands and waters, bolstering community resilience, and advancing environmental justice.” When the line item was rinsed out of the infrastructure deal Biden struck with a bipartisan group of senators in late June, the White House released a memo instructing congressional Democrats to include a Civilian Climate Corps in the budget bill they promised to pass alongside the bipartisan package. That was as specific as the mandate got.

Progressives and their climate allies are supporting the Senate’s $30 billion in funding and a framework based on legislation Ocasio-Cortez and Sen. Ed Markey (D-Mass.) introduced earlier this year. Housed under the umbrella of AmeriCorps and overseen by a new office within the White House, their version of Civilian Climate Corps would pay at least $15 an hour and offer health care and other benefits. At least half of the funds allocated to the program would go to “frontline environmental justice communities”—which often bear the brunt of environmental disasters—and half of the Corps members would come from those communities. “The CCC is going to be a job-creation machine for Black and Brown Americans to work in their hometowns on projects that will protect their communities from the climate crisis,” a Democratic Senate aide close to the Civilian Climate Corps negotiations tells me. Neguse led on a letter with more than 80 of his Democratic House colleagues that outlined this framework in July.

But AmeriCorps has a reputation at odds with progressives’ aims. Its low-paying jobs have a track record of attracting privileged, often white young adults who parachute into hardscrabble communities, only to abandon them once their term of service is up. That’s why both the proposed hiring practices and the $30 billion in funding are so necessary, supporters of this framework say, because it can be used to ensure the Civilian Climate Corps does, in fact, offer good-paying jobs. “The program that we’ve constructed has been constructed in a way that is very intentional in terms of being inclusive,” Neguse says. “We think this program is going to be incredibly successful if we make the necessary investments.”

But the House has held steadfast to the White House’s original $10 billion offer and repeatedly rejected the Senate’s pressure to triple the funds. Rep. Bobby Scott (D-Va.), who chairs the House Education and Labor Committee, has favored expanding existing job training programs within the Department of Labor and other federal agencies. Scott believes that would allow the program to better function as a career training program invested in workers’ long-term prospects, as opposed to an AmeriCorps-style months-long service stint, according to a Scott spokesperson. “If the goal is workforce development, I think we have more effective ways of doing it,” Scott told the New York Times last week.

In negotiations between House and Senate leadership, staff to House Speaker Nancy Pelosi (D-Calif.) have raised concerns about housing the Civilian Climate Corps under its umbrella, noting that Black lawmakers have concerns about the AmeriCorps-based program because of its reputation, according to a source close to the negotiations. (A spokesperson for Pelosi did not return a request for comment.) Neguse said he hadn’t heard those concerns directly from his colleagues, declining to discuss private conversations he’s had with Scott or any other lawmakers.

Last week, the House Education and Labor Committee approved funding for a $10 billion version of the Civilian Climate Corps, with some funding for AmeriCorps and slightly more for other workforce training programs. It will now be up to Schumer and progressive Democrats to convince their House colleagues to increase spending and convert the program’s structure before the budget bill goes for a vote on the House and Senate floors. But nailing down the details on the Civilian Climate Corps is a simple task compared to the other roadblocks that lie ahead for Biden’s agenda. Sen. Joe Manchin (D-W.V.) has refused to back a $3.5 trillion bill and has raised concerns about the legislation’s plans to reduce emissions by paying energy providers to use clean sources of energy. He told CNN in July that he was “very, very disturbed” by the climate ambitions outlined in his party’s budget plan.